Watching even the lead runners climb up the last hill (Trahenna) in one of Scotland’s oldest hill races it looks like they have had a drink or two too many. They have in fact run over almost 20 miles of hills from Traquair House in Innerleithen to Broughton in the scenic Scottish Borders.

This year the annual race had the added ingredient of being the fifth counter in the Scottish Hill Runners championship. This meant the field was larger than usual and contained some decent runners at the sharp end. With the prospect of enhancing our SHR standings and also individual mugs to be claimed the Shettleston turnout was also high with a squad of 13 being bundled into the coach at Broughton for the winding journey to the start.

Finally, after much hanging around (no need to warm up for a 3 plus hour race) we were sent on our way over the lawn of the Traquair House, along the road and into the hills. 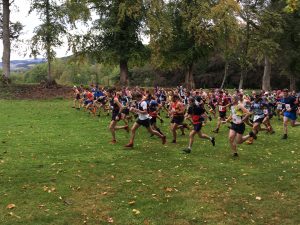 As expected Tom Owens, fresh from his high altitude summer, was making light work at the front. The chasing pack kept catching up with him due to his unusually slow descending and his usual lack of navigation skills (in Europe they follow flags!!). Despite this he managed to maintain his position at the front and won the race in an impressive 2:48, a minute ahead of Cambuslang’s Alasdair Campbell. A stroll in the hills for Tom after his 100 mile UTMB.

Next running in for the club was Robert Simpson. Despite looking like he wanted to have a lie down on the last climb he kept it together and finished in 6th place. He never quite got into the lead group but in the end was only a few minutes away from most of the lead pack. Jethro Lennox (8th) and Kenny Richmond (11th) managed to hold off the Carnethy vets to take the M40 and M50 wins. Having previously won this race Kenny knows how to pace this well and came through the field with a very impressive run helped by recent warm weather training in Mallorca.

John Connaghan (25th, 8th M40), Ross Cruickshanks (27th) and Stephen Winter (30th, 9th M40) had a good battle over the hills. Ross might well have managed to overhaul John had he not gone over his ankle on the last hill. Bill Breckenridge (35th) and Iain Pender (36th) were the next two to stagger across the finish and get handed the post race bottle of beer. They had passed Chris Grant-Pantrey (38th) and Mike Deason (39th) both of whom are more familiar with shorter races and struggled more than most going over the last hill. This race was very different than Mike’s usual hunting ground of jumping over barriers around a track. Great effort by Mike in giving it a go and running one of the longest races of his life.
Walter Henderson (58th) was pleased with running his fastest ever Two Breweries in 3:45 and John Duffy held it together after an early fall over a fence in the first half and finished in the top hundred. 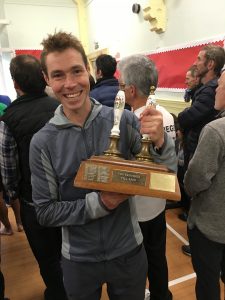 Many thanks to race organiser, John Hamer, and the rest of Westies for doing a great job organising the race.

With one race remaining what does this mean for the coveted 2019 SHR champs? Still waiting for the SHR statistician to run the numbers but unofficially it looks like we have done enough to win the Senior men’s and M40 team. The last time we did this was 2016 – great effort by the hill running squad.
Individually, Robert Simpson could still finish in the top few, Jethro has the M40 title in his sights and Kenny has a good chance of finishing runner up. He turned 50 half way through this season so has to wait until next year to have a proper crack at the M50 title. Bill looks like he could come away with some colour of pottery in the M50s. There are still places available for the final race (plus celebration) at Meall a’ Bhuachaille race.

It’s just as well that the hill runners came away from Two Breweries laden down with beer as there’s lots to celebrate. 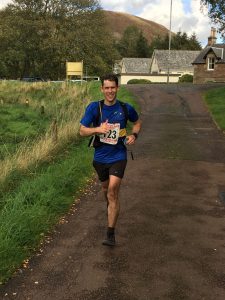 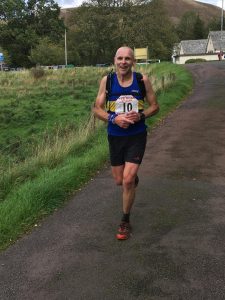 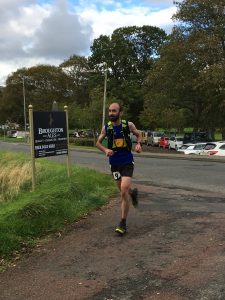 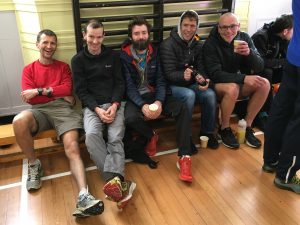 Emirates and Johnstone Action and other events

Over the last week has saw Shettleston Harriers’ members