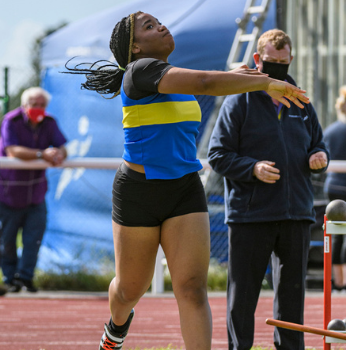 Congratulations to Chris Bennett who finished 2nd in the British Olympic Trials and UK Championships at Manchester at the weekend. His distance of 73.53 m confirms his recent great form of being a 70m plus man in every competition this season .He will be hoping to get the Olympic qualifying distance in the next few weeks .

Again, over the weekend we had had athletes in Dundee, Dunfermline and Aberdeen as competition starts up.

PB’s galore over a range of events

The throwers and our jumpers were out in force and a great performance by Teddy Tchoudja (14.14)PB moved her to 2nd in the Uk U/20 rankings .Her young club mate Chloe Fox is also great improvement in the Javelin with PB performances at Dunfermline (Friday) and Dundee (Saturday)  getting closer to the 20m mark –PB now 19.20m .

Our young athletes have been re writing their 800m PB with Matthew Fox ( 2.18.25  and David Woods 2.13.89 on Friday evening. David followed this up with a run in Aberdeen in 2.14.19 .Great consistence running. Katie Woods also followed her older brother recording a fantastic PB of 2.29.36 over 800m. All the hard training now worthwhile!

The final event of the weekend was the Combined League match in Aberdeen .With support from the club 6 athletes made the trip to Aberdeen with mixed success. David Martin false started in the 200m and meant he was DQ. Dan Lowe suffered an achilles injury in the 5000m and had to drop out .

Carson Graham preparing for the Master’s Championships jumped 1.60m in the High Jump .

Congratulations to Charlene Manley who has been selected to compete for Scotland over 800m in an international Masters  match against the auld enemy (England).This is Charlene first international selection starting athletics later in life.