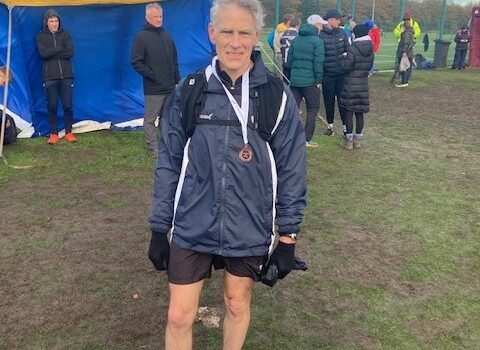 The Short Course Championships returned to Lanark Racecourse, the site of the first every National Cross-country championship in 1886. The first race was delayed a week due to the weather in 1886 and a few athletes this weekend may have hope for the same as wind and heavy rain battered the athletes.

Lachlan Oates returned to great form placing 3rd in the men’s race not too far behind Andy Butchart and Jamie Crowe. It was a great day for the Oates family with dad, John, gaining his first national medal at the age of 62, placing 3rd in his age group. Jamie Burns running for Glasgow University was next club member in 20th position and with be in a good position for selection to run in Under 23 cross country event at Liverpool. It was great to see so many seniors out running. The men finished 4th team just out of the medals.

There was also success in the Ladies Race with Avril Mason picking up a bronze in the W/40 age group. First lady in for the club was Kayleigh Jarrett in 27th position in a race won by Laura Muir. The Ladies finished 10th team.

Davis Woods had an excellent run in the U/17 event finishing 22nd position. Two U/17 girls braved the worst of the weather with Erin Ellor 41st and Jessica Grant 45th .

Again, a big thanks to everyone who helped with team management and the tent -We certainly needed it at the race .