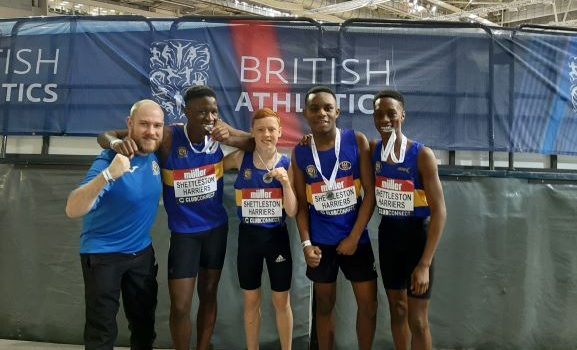 On Saturday saw the World Athletics Indoor Tour coming to Glasgow in the form of the Muller Grand Prix at the Emirates. Included in the match was the Scottish Under 15 4 x 200m Relays . After a club record to qualify for the final a few weeks ago the team of Lucky Fadun, Maynard Conteh, Coramc Day and Michael Conteh lined up for the final being cheered on by the full house. Lucky on the first leg ran to set the team up in 2nd place with Maynard, Cormac and Michael running great legs to maintain a silver medal position again smashing their club record by just over one second in 1.43.33. Well done boys and a thank you to Steven Macdonld who did his team manager on the day.

A few days earlier saw 8 club athletes travelling to Armagh. The Armagh series of races are amongst the most competitive road races in the world and the club are grateful to Armagh AC for the invite each year. We look forward to welcoming them to the Allan Scally Relays in a couple of weeks time.

Our eight athletes from the club toed the line in the 3km(Ladies) and 5km(Men). Liz Burns had her  first  time as team manager when Elaine Mackay fell ill just before the event and could not travel to Armagh.

First home for the club in the Men’s race over 5km was Mike Deason in 14.28(PB)  followed home by Lewis Raeburn 14.38(PB), Both excellent performances in a race were 138 runners broke 15minutes !!!! No other race in the world has such quality. Peter Avent 15.16 and Lucas Cheskin 16.10 completed the club runners over 5km.

Four ladies also travelled to Armagh to compete in the International 3 km race. Supervet, Avril Mason, was first home for the club just missing her PB by 3 secs in a time of 10.10  and finishing 2nd in W45 age group. She was followed home closely by Kayleigh Jarrett 10.15(PB)  and Ruth Joss 10.19(PB) .Fourth  athlete to compete was Jennifer Martin 11.05.

I am sure all the athletes would like to thank Liz and the club for the support to travel to such an excellent event – we have a busy two weeks coming up with the National Cross Country Championships this coming Saturday and the 50th Allan Scally Road Relay on 29th February.

If  you  can help in anyway on the Saturday 29th between 11am and 2.30pm please let John Mackay know ASAP

We also have tickets available for the post race reception in the West Brewery (4pm -8pm) after the  Scally Relay .150 tickets are already gone -so only 50 available now -It is a great opportunity for club members to get together  -Cost £20  – Please contact John if you would like one

On Sunday Calum Oates made the trip up to the North East for the Kinloss to Lossiemouth 1/2 Marathon which he came 9th with a Personal best of 73.07mins.

On Saturday was the Glasgow University 5 Mile Road Race, Paul Sorrie was 6th and first Over 40.

Thank you to Brian McAusland for the following article

Some activities – for our young members & maybe older members !

Information for 2020 Track and Field Season  –  due

This morning (Tuesday 17th March) we have received advice

Keep jumping with the Graham’s Session

Thank you for Carson Graham for preparing this session.

This week’s challenge is the Virtual Mile. The mile