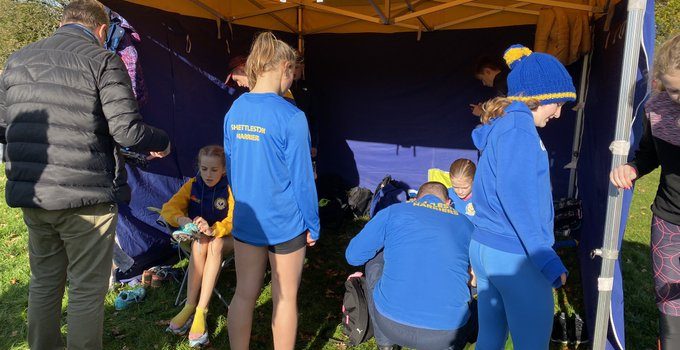 Forty two Shettleston athletes made the short trip to Cumbernauld to finish off the Relay Season in mainly bright sunshine.  Comparisons to last year’s times were impossible as it appears the course was slightly longer this year. 11 teams toed the lines for the club over all age groups, from the Young Females to the Masters O/50 Age Groups.

First up were the Young females and an excellent improvement from 35th in 2018 to 24th team this year, showing the benefit of consistent training for the endurance group.  9 young females competed over the age groups:

Johnny Burns was the star of the Young Males running one of the fastest U/15 times of the day but this was only possible as his teammates give him the opportunity to be in the mix. The A team finished 26th overall in a high quality field.

The Senior Ladies made an improvement from last year to finish an excellent 7th overall in one of the highest standard races for many years.  It was also great to see U/20 ladies and new members compete for the first time in the championships. This is due to the hard work of ladies club captain, Avril Mason.

The final race saw the Senior Men, M40 and M50 teams compete in a race which featured Olympic athletes/world champions and an European Medalist. What other sport can you do this? Our A team are making the habit of finishing 4th in this Championship and did so again for the 4th time in the last 6 years.  This was a slight disappointment but the team contained an excellent mix of youth and experience and are sure to be in the medals throughout this year. Lachlan Oates is getting back to his best form running one of the fastest laps of the day to put us in 4th for the finish. Paul Sorrie also showed excellent form, running the fastest M40 time of the day.

Good performances from our athletes are only possible with help of coaches, parents and team managers and our thanks are extended to everyone who helped on the day, including the officials and marshals.  A big thanks to John Duffy who set up and then took the club tent home. Can you help in the future? We need someone to take the tent to Kirkcaldy for the National Short Course.

Meanwhile Sunday saw the first Indoor Event of the season with the Scottish Athletics Indoor League at the Emirates Arena. This event saw some of our younger athletes competing for the first time indoors and we saw 26 personal bests from the results we know at the moment from the 36 athletes competing. Well done everyone

Thank you for all the volunteers to helped to get the team organised and do their officials on the day.

The Leeds Abbey Dash 10km  has happy memories for lots of Shettleston athletes over the years, it is one of the top 10 km’s of the year stacked with top international athletes. Ben Johnson continued his great run of form in preparation for a marathon later this year with a fantastic run of 29.35 a massive PB. Fionnuala Ross was feeling unwell before the race but still ran excellent time of 34.10

Shettleston athletes again pop up around the world with Gary Hester in Frankfurt (Germany) running the marathon in a time of 2.57.37 just outside his personal best.

Thank you to Brian McAusland for the article below

Thank you to Brian McAusland for the following article

Information for 2020 Track and Field Season  –  due

This morning (Tuesday 17th March) we have received advice

Keep jumping with the Graham’s Session

Thank you for Carson Graham for preparing this session.

This week’s challenge is the Virtual Mile. The mile