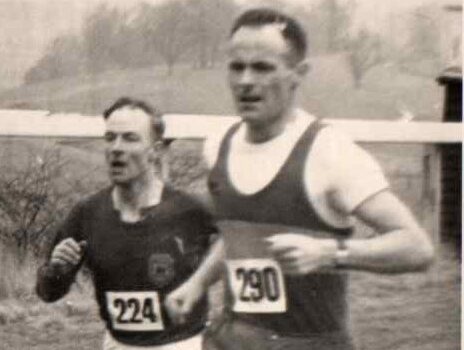 The name Jack Kean will not be too familiar to current members of Shettleston Harriers but like many former members the club has had an influence on his life. In recent years many former members families contact the club looking for information and telling us how their loved ones were grateful to the values the club gave them. If you look at Jack’s distinguished working career you can see he certainly used them.

Who was Jack Kean?  Jack was born in 1933 in Springboig and joined Shettleston Harriers around 1944/45 as a 12-year-old boy. He quickly made his mark winning team medals at Youth level at the National Cross- Country Championships in 1949 and Junior level in 1954.He was not one of the stars of the day but someone the club could depend on to do his best and always be there. After contracting jaundice, he returned to take up field events and competed regularly at Shot and Javelin events with success during the 50’s. When Shettleston Harriers organised one of the first open Marathon races in Britain in 1961 Jack was one of the driving forces behind it.  Current member Jim Harkins, now in his 80’s, remembers Jack pounding round the old track at Barrachnie in preparation for the marathon. Jack never manged to finish the Shettleston Marathon, hitting the wall around 20miles.During this time he also competed in many of the longer races including the Helensburgh to Clydebank 18mile race. As 49 years old he competed in the 2nd London Marathon 1982 running a time of 3hours 29minutes. A fine achievement for a man close to 50 years old.

Like all good club men his skill was not just in competing but in the administration of the club -In 1963 he took over as secretary to the club and then in its 60th Jubilee Year he was club President. Jack was rightly proud of this and organised many activities and developments during this year. Around this time his work took him to London and he settled with his wife Ann, also from Glasgow in Orpington for the next 50 years. Jack never forgot his time at the club, meeting up with Alex Naylor when visiting Glasgow.

Like many people COVID took its toil on Jack and he passed away in March 2020 age 87years -You can read his obituary which was in Times newspaper by following this link. His wife Ann contacted the club and club secretary, John Mackay, visited her recently during a visit to London. Jack was determined to help the club and has donated a sum of £10,000 to the club. After discussion with Ann, it has been decided it will be used in two ways- A Jack Kean Bursary will be awarded to a different athlete each year to help with training and a Jack Kean Memorial trophy will be awarded to an individual This trophy will be awarded at the AGM to an individual who always gives their best but not always a winner. Achievement is not always winning.

Ann was determined to visit Glasgow to present the cheque to club president Elaine Mackay. It was an emotional trip for Ann as she toured the East End visiting the old club house in Gartocher Road, telling Elaine she used to wait for Jack outside, and then visiting our new base at Crownpoint.

The club would like to thank Ann and we hope the bursary and trophy will be a fitting tribute to Jack.