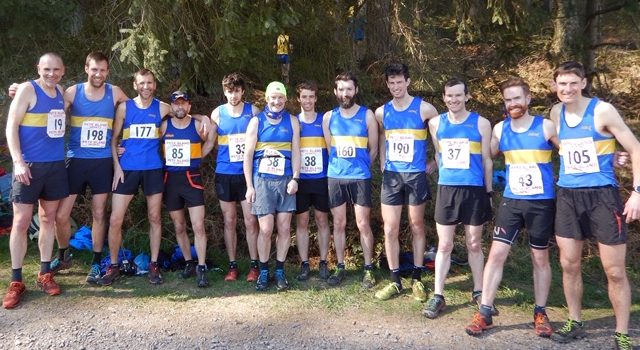 The 2019 hill running season is well and truly upon us with races coming thick and fast over recent weeks. Here is a brief round-up of the latest news where the club has been in action.

A short and sharp 6.4km with 400m of climb. First counter race in the 2019 SHR championships. A bit of a longer drive to get there, Screel being situated down in the southern reaches of Dumfriesshire. The plan was to travel en-masse to get the majority of our 15 strong squad safely to the start. That fell to bits pretty quickly with one having a lie in, shortly followed by driver confusion splitting the convoy. We also had a Sunday style driver, resulting in two nearly missing the start and a final debutant on the hills for the club who actually did miss the start. More of that later. A cracking sunny day coupled with strong winds. Sections of the race route had recently been gravelled, making it more like an uphill road race. Not that the majority of the hardened hill runners chose to use to their advantage.

With 202 runners toeing the tight start line, it was inevitably breeding ground for disaster. Sure enough, within seconds of the off, there was already a pile of ‘men down’. The casualties, Robert Simpson and Andy Fallas of Carnethy. Fortunately, despite some bloodied legs, this didn’t keep our man down who, on account on Strava, looks to have rinsed himself of the descent, recording the 3rd fastest time of the day. Tom Owens was 2nd to the summit, with Sacha Cheplin lighting the torch paper from start to finish, winning by nearly a minute and setting a new course record, which had stood since 1997. James Espie of Deeside was 2nd with Andy taking 3rd. Despite being close to the action at the start, Jill Stephen of HBT managed to remain unscathed, taking the win in the ladies race in a time of 33.41.

A steady flow of Shetts placed well to secure 1st place in the senior men’s race, the V40 team 2nd, having their work cut out to keep pace with a super strong Carnethy. It will be an interesting battle between clubs over the forthcoming season.

A special mention to Mark McKenny making his debut on the hills, who, despite driving to the wrong Screel, still managed to get round the course. Running the top half of the route the wrong way round can be excused given that he started the race just before the leaders were finishing. Welcome to hill racing, Mark!

With the class of 2018 succumbing to a host of navigational errors in the clag (messrs Gollan and Stewart to name but a few) our friends over in the Mourne Mountains decided to give everyone another crack, choosing to re-run the race again as the first British Championship counter.

This time however, the clag wasn’t the issue, instead Storm Hannah decided to pay the Emerald Isle a visit. With conditions properly filthy, the race organisers decided at the last hour to run a wet weather route. With nobody keen to take the lead, James Espie, in his words, decided to take it on at the front. A battle at the only summit of the day ensued with Rob Jebb of Helm Hill Runners dibbing first, James and Andy Fallas following closely. Robert Simpson wasn’t far behind at this point.

The positions changed on the descent and it was Mark Lamb of Keswick who fared better taking the win in a time of 1:03:17, with James 5 seconds behind. Joshua Jardine took 3rd place (1st MU23) with Jebby taking the MV40 win. The ladies race was won by Kelli Roberts of Ambleside in 1:13:27. A somewhat depleted travelling squad meant that we only had two counting runners. Chapeau to Robert and John who battled the odds to get to NI and tough out the race.

An array of photos can also be found on this page at the foot of the link.

The 66th edition of this classic ‘Marathon with Mountains’ race in the Yorkshire Dales. Some lad apparently did the double – TP on Saturday and London on Sunday, proper hardy! Speaking of which and for those who have not already had the pleasure of viewing, here’s a short film courtesy of Yorkshire television of the 1976 edition. Old school, but not that much has changed in 43 years, Adidas Samba are still in circulation.

No first-hand account of conditions to report on but looking at the photos, Hannah managed to reach as far as Yorkshire too, although maybe not as bad as it was over the Irish Sea. With Carl Bell donning a vest it can’t have been too severe.

Following a prolonged spell on the side-lines with surgery and subsequent injury, Tom Owens was back to defend his title. Whilst Tom had successfully raced Screel without further set-back, a win at the Three Peaks was likely to be a tall order. Despite a four way battle at the front with Ricky Lightfoot, Carl and Tom, it was Brennan Townshend of Keswick AC who came out on top taking the win for the first time in 2:52:02. The placings for the minor honours were Ricky, Carl followed by Tom. Great to see Tom getting back to form. Vic Williamson of Bingley Harriers had no real challenge in the ladies race, successfully retaining her crown and finishing 26th overall in a time of 3:20:01. Walter Henderson also made the trip, getting some prep in for his assault on this year’s Transvulcania in Majorca, next weekend.

A special mention to Tom’s brother, Matt who completed his first Three Peaks in a commendable 3:53:03. Must be a good bloodline in the Owen’s family! The door is always open, Matt if you ever move north of the border…

On the domestic front, the 2019 mid-week race series (13 in total, 6 to count) kicked off with the Kaim Hill race, in North Ayrshire. A great wee race, although it appears that nobody from the club thought so, or made the trip.

Second race up on was Beinn Dubh, Luss on the banks of Loch Lomond. Looked a tad blustery, but dry. A rare appearance from the man, Finlay Wild, making the trip south from Fort William. Enough said, who won, more who was 2nd (John Yells) a 1-2 for Lochaber. Niall McAlinden of the hosts, Westies was 3rd. Jill Stephen took the ladies race. Any planned assault on the B&B series might be best put on hold, well, at least until Fin’s 2019 race calendar is established.

A glorious summer’s night for this local cracker. Shame it’s Westies who organise this one too. Unprecedented turnout – 191 runners. You’d think it was a championship race! A great introduction to hill running. Also a great turn out from Shettleston, 7 runners making the short trip.

Getting a bit repetitive now so will keep it short – Espie 1st (28:41) and new course record. I think at the expense of, Joe Symonds. James had a comfortable gap at the top, Finlay Todd of Glasgow Uni 2nd with Alistair Campbell, Cambuslang 3rd. Good to see Alistair back after being floored on the descent at Screel, putting him out of the race.

Chris Grant-Pantery had a top run in his second outing for the club finishing in 7th. Also, good to see Scot Campbell making a first appearance on the hill circuit for the club and a welcome return to Rod Reis, following a spell loafing about in the Alps. And not forgetting, Grant Boyne, coming back into the fold. Eliot Sedam, Carnethy had a sterling run to finish 4th (1st MV40) with Justin Carter turning the tables on Kenny from the previous week to take 3rd MV40. First female was Emma Peters of Westies in a time of 37:51.

Emirates and Johnstone Action and other events

Over the last week has saw Shettleston Harriers’ members