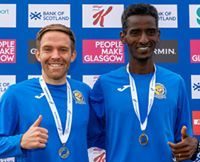 The Bank of Scotland Great Scottish Run Weekend was a great occasion to showcase the great work the club does in the City on all levels with the club involved every day over this great festival of running.

Weynay Ghebreslassie made his return to the racing scene taking the National Scottish Half Marathon title with clubmate, Ben Johnson, in the silver medal postion.Weynay’s preparation for the race was difficult after he missed a connecting flight and spent 18 hours on an airport floor. His 5th place overall in a high quality international field was very impressive. Recording an PB performance (64.22) after such a difficult preparation indicates a major breakthrough is on the cards when he tackles the Manchester 1/2 marathon in a couple of weeks time. Ben’s 2nd place was also an impressive run recording  a PB of 66.02. His name will not be as familiar to most members, joining the club when he working at 2014 Commonwealth Games before moving South for a new job. Ben is a great  example of what hard work can do  moving from a 33 minute 10km runner to a shade over 30 minutes and picking up an England vest over the marathon in the process. Completing the winning team was Lachlan Oates who finished 19th over all.

Avril Mason simply gets better with age stepping on the podium again with a 3rd overall in the National Championships  and winning the Masters title again. It was a pity we just missed out on a team medal in the ladies event with Ruth Joss 6th and Cara McCafferty 71st to finish 4th. The club is about  more than medal winners  and 25 of our athletes completed the 1/2 marathon course. A special mention for John Sutch who had a busy day running both the 10k and the 1/2 Marathon ! John Connaghan and Bill Breckenridge also had a busy weekend with a 17 miles Hill Race on Saturday before competing at the 1/2 Marathon on Sunday. Well done to everyone who competed.

In the 10km event the club again had a high profile with Lewis Raeburn was the highest finisher in 4th and recording a PB in the process (32.04). With 6 athletes in the top 40 it was an impressive sight to see so many blue and gold vests pounding the streets. New member, Kayleigh Jarrett, made a impressive start to her Shettleston career with a 7th place in the Ladies event and with Jennifer Martin 11th, the Ladies team for the winter is looking strong. The 10km event also saw over 20 members taking part and again it highlighted the spread of ability and what a club is all about. Well done to everyone in the club for their massive commitment !

Thank you to Bobby Gavin for the photo.

Every week the club can be found throughout Scotland and even further afield . Two members travelled to main land Europe this weekend to take part in Big City marathons in Berlin and Budapest. Scottish 10km multiple Champion, Fionnuala Ross, travelled to Berlin where she  finished 59th lady  in a personal best of 2:47.19, taking a 1 minute off her previous best. Meanwhile Andrew Gibson travelled to Budapest to tackle his first marathon, he finished 54th in a time of 3.03.12. Well done Andrew.

Also had some good news from the Shettleston’s Hill runners who competed in the Two Breweries Hill race on Saturday. We believe they secured the Scottish Hill Running Team Championship for Senior Men and Masters. Hillrunning Captain, Peter Mackie, will confirm in due course.

Senior /Junior Men and Ladies : –   please reply to John Mackay and Avril Mason emails /postings  for your availability for the forthcoming relays .

Club sessions WILL NOT restart at the moment. Some

Busy week for Chloe with Javelin and Shot Putt Events

Chloe had a busy week with Virtual Javelin and

Over the last 4 weeks we have seen 16