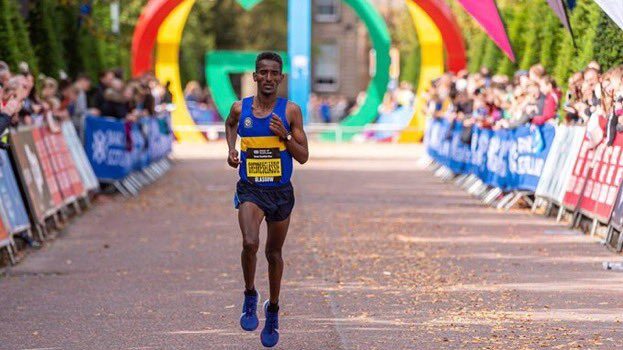 Weynay Ghebreslassie confirmed his potential over the marathon distance with an excellent personal best of 2.16.27 and a 12th place in the London marathon this weekend. Weynay overcame a number of barriers just to be on the start line. Not being part of the Scottish marathon project despite running a fast half marathon time of 64mins 06secs, the club has supported him in his ambition to represent Scotland in next year’s Commonwealth Games. London Marathon elite organising team have also been great helping Weynay to meet all the COVID regulations after his training base in Ethiopia was put on the Red list. They also organised his travel from Ethiopia and his participation in this year’s race. Just missing the qualifying time for the Commonwealth Games in Birmingham next year he will attempt another marathon later this year or early next year. He was disappointed with his time after being on pace to run well inside the qualifying time -Little did the people watching the race know he was in constant pain nursing a leg injury for over 6 weeks before the race. Such was his determination to run he overcame the pain barrier to finish. He now needs the support to train at altitude again. A former Olympic athlete in London he ran for Eritrea over the steeplechase and then sought refugee status. It has been a hard struggle for him as he gained his British Citizenship and Scottish Qualifications. The club is proud of our inclusive policy and the support we give all our athletes to fulfil their potentials.

Meanwhile over the water in Belfast the club’s Irish international athlete, Fionnuala Ross, was again in great form winning the ladies race in an excellent time of 2.43.43. Fionnuala has represented Ireland a number of times and was Glasgow’s Sports Council female athlete of the year in 2020.

Two other Shettleston athletes made the journey to London with mixed fortune. Brian Scally struggled in the later part of the race and was forced to walk recording a time of 3.24.30. Gerry Mason fulfilled an ambition to compete in London finishing in a time of 3.59.18.

Congratulations to John Owens who was awarded the Russell Hogg Trophy at the Scottish Disability Sport’s awards this weekend. Another great example of a club member who gives up their time to help others.

On the domestic front the club continues its preparation to host the West District Relay Championships at Alexandria park on Saturday 9th of October. Please let us know if you can help in anyway. Milnbank HA Sports Hub again are showing their commitment to work with local clubs in helping to host this event.