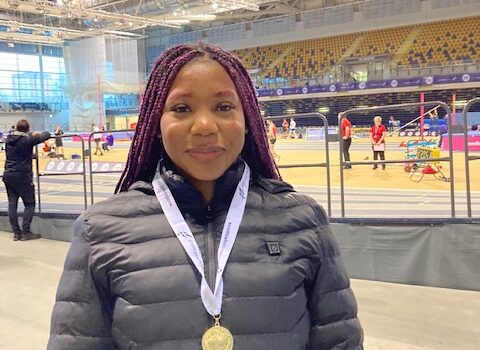 It was a busy day for club athletes competing on all surfaces – cross country ,road and track all over the country

Lachlan Oates was competing for Scotland at the Celtic international in Northern Ireland where he finished 16th in the international field helping Scotland to finish 3rd  in the team competition. Fionnuala Ross, running for NI & Ulster, finished in 13th place and was part of the winning team in the Celtics and the runners-up team in the Home Countries.

The Scottish Indoor Championships took place at the Emirates Indoor area and produced a number of medals for Shettleston athletes. Talented athlete, Teddy Tchoudja,   took gold in the Senior Women’s Shot, adding the Indoor Title to her Scottish Outdoor Title, with a distance of 13.55m moving her to the top of the Scottish rankings and into the top 10 in the UK. Her coach, John Scott, recently putt the shot for a new M80 Scottish record. Commonwealth Games athletes Angus McInroy concentrating on the Shot took silver with a distance of 14.67 (season best)

Congratulations to Imante Gkontouin  U/17, and coach Gordon Bury, with a great performance from this young athlete over 60m – 7.26 in heat 1st place ,7.20 in SF 1st place and a fantastic silver in the final with a time of 7.25secs – lossing out by 0.05secs for the gold .This was Imante  first championships and the hard work both Gordon and him has paid off.

Still looking at field results, Andrew McFarlane took silver in the pole vault and Morgan Findlay was 6th (10.66) in the SW Triple Jump. Second claim member Amit Kumar was 4th with a height of 1m 94cm in the high jump.

On Sunday saw our Under 12 competing in Scottish Athletics Indoor Superteams 2022 at the Emirates Arena. The Girls team of Alexia Riggs, Esme Guinea, Leia Connelly and Zoe Roberts finished 9th from 37 teams , well done girls with some excellent performances. The Boys team of Edanne Gomes, Joseph Lanahan , Philip Klein and Ryan McCallum finished 6th. Esme was 5th in the individual event with Joseph 2nd in the boys event.

Also a big thank to Ellie and Matthew who did they team managers on the day and to everyone who got their child to the event to give them all a great experience for everyone, thank you

The 2nd race of the Babcock series moved to Dumbarton

News from the hills…

The Babcock Series kicked off in great style on