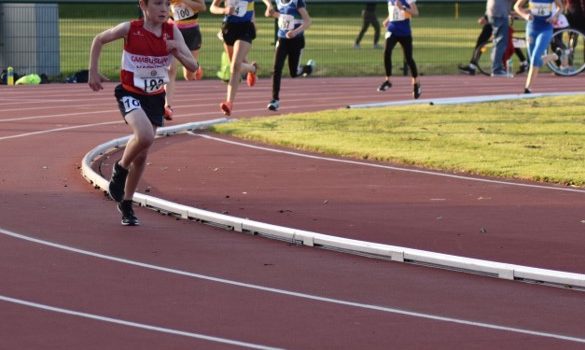 August saw a busy times for club members, with action from Manchester, Birmingham and all over Scotland with members competing in all sorts of events as the 2019 Track and Field Season comes to an end and eyes turn to the Cross Country, Road and Indoor Season.

Miraji Ahmed was chosen for GB Juniors to compete in Manchester in the Triple Jump, finishing 5th with clubmate, Michael Deason, picking up a Scottish vest for the 3000m Steeplechase where he finished 4th.

A couple of days later the action turned to Grangemouth for the Scottish Senior and Under 17 Track and Field Championships. Michael Deason won the 3000m Steeplechase title with Matthew Turner just outside the medals in 4th. Over the track season Avril Mason has been in excellent form and this was confirmed in the 5000m finished 5th and picked up first O/40.

In the Field Teddy Tchoudja won the Shot with Miraji Ahmed finishing 2nd in the Triple Jump.

The British Championships on the 25th August saw Chris Bennett competing in the Hammer with Chris finishing 5th.

The 20th and 27th August saw plenty of action at the Club’s home track, Crownpoint, with the Milnbank Housing Association Open Graded Meeting 2019 Edition. Firstly the club would like to say a HUGE THANK YOU to all the Scottish Athletics Officials, volunteers and Glasgow Sport Staff and for all the athletes who supported the event with 700 entries.

There was plenty of great perfomances which saw people competing in their first event right up to International athletes.

The Alex Naylor 3000m Memorial Race on the 20th saw a double victory for the club, in the Men’s Race Lewis Raeburn took 14 seconds off his personal best to win from Jonathan Glen and Cameron Watson of Inverclyde. Meanwhile in the Woman’s Race Ruth Joss won from Charlotte McKenna (Giffnock) and Becky Dunphy (VPCOG)

On the 27th was the Derek McLean Memorial Under 15 800m saw a dead heat with photofinish unable to separate Lewis Thomson of Perth Strathtay and Oscar Logan of Law & District, 3rd was Daniel Boyle of Whitemoss

These events were possible due to the support with sponsorship from Milnbank Housing Association and Run4It, and the club says thank you. Also thank you to Peter McLaughlin for his photos.

This weekend (31st August and 1st September) saw the Scottish Men’s League on Saturday at Grangemouth, see full results . The club finished 5th in the league for 2019. Again thank you to team managers and all the volunteers who helped throughout the season.

On Sunday action was at Kilmarnock with the final match in the Central and South Scotland League. Again there was some great performances, we are still awaiting the official results but it looks like we have won promotion to Division 2, will be confirmed when the results are all checked. Well done to everyone who competed yesterday and to some of our members who dusted down their spikes to help get points. Again thank you to all the people who helped with the teams and volunteered.

Over the last month we have members who have competed at the various Parkruns around the country. John Duffy had a busy August with flying the club colours at the Donegal Half Marathon and then finished 8th at the Tom Robb Trail Race at Carron Valley.

Apology if any perfomances have been missed but if any members has been competing please let us know, we do our best to include as many performances as possible and but we will miss some.

H.W Harvey joined Shettleston Harriers around about 1913 and

Shettleston Harriers say ‘Thank You’ to our local care homes

COVID-19 – Phase 3 and return of some club sessions

From week commencing 20th July 2020 some form of

Over the last two weeks 19 of the Club’s