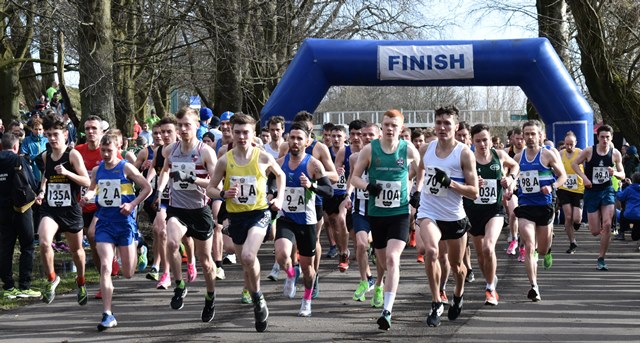 The 50th running of the Allan Scally Memorial Race, sponsored by Webhelp,  was a day to celebrate. A record field of any road relay in Scotland, International standard running , a real community event  and sunshine !

Edinburgh have had to wait 30 years to take the trophy back to the capital but did it in style with a balanced team performance. European and Commonwealth medallist, Jake Wightman, lead the 170 athlete home on the first leg sneaking in on the record Ally Hay had set last year. Edinburgh were never headed and went on to break the course record in a time of 60 mins 18 secs. Runners up were last years winners, Central AC, but they had the consolation of providing the fastest lap with Scottish Cross Country Champion, Jamie Crowe, smashing the record with a time of 14.33, Shettleston finished 3rd with Lewis Raeburn running the fastest U/20 time of day with a PB performance around the course of 15.11.

The corporate team prize  for men, supported by Run4it, was won by the Granite City Harriers who included international athlete, Michael Ferguson, in their team.

The female record also went with Scottish Country Silver Medallist, Annabel Simpson ( Glasgow University /Fife AC) taking 15 seconds off the old record when she ran 16.19. The ladies of Shettleston made sure the ladies trophy remained in the East End of Glasgow with Avril Mason (Fastest F40), Kathryn Pennel, Ruth Joss and Fionnuala Ross (3rd Fastest)  combining to take the title  from the University pair of Glasgow and Edinburgh. U/17 Shettleston athlete Elise Hollywood recording the fastest lap in her age group.

An event of such a scale cannot take place without the support of many people .The club is grateful to our  Sponsors – Webhelp ,Run4it, The Scally Family, The Calton Area Partnership, Asda, Barclays Bank, West Brewery and Arnold Clark, helping to make the event happen. Club members and friends who helped in any way and to Scottish Athletics for promoting the event over many months. We were also blessed to have a world class announcer, Geoff Wightman, who helped to create a special atmosphere  throughout the day.

The post race event in the West Brewery was a special night with Sue Walker(nee Scally) and her wee cousin, Elaine Mackay(nee Scally), welcoming guests from the endurance world of Scotland and further afield. Sue gave an insight to who was Allan Scally and the impact this family has had on scottish society with involvement in the Girl Guides, Rugby  and of course Shettleston Harrier. It was great to welcome the Scally Clan from Boston(USA), Armagh AC(Ireland) and our visitors from Germany and England to the special event.

MP Alison Thewliss and MSP John Mason also attended the event and we are sure they were impressed with the contribution the club makes to the East End of Glasgow. Chief Executive of Scottish Athletics, Mark Munro, was full of praise and the upsurge in our sport is due to the close working relationships clubs have with our National Body.

Planning starts for next year !

History and all results of the Allan Scally Road Relays, THANK YOU TO RON MORRISON

Over the last week Shettleston Harriers’ members have been

Track and Field finally kicks off for 2020

With the further easing of COVID19 Regulations 18 plus

Another weekend of action at Meadowmill

7 club athletes made the trip to Meadowmill to